It’s a poor artist who blames their tools for the shortcomings in their work. That said, having the right tools is essential if you want to work efficiently. Could Rembrandt have made all of his paintings with one brush? Probably.

But it would have taken a lot longer than it did with a proper set of paintbrushes. Jimi Hendrix could make any guitar sing, but he was particular about his choices. The same is true for any kind of art.

Visual art in particular has come a long way in the past few decades, thanks to digitization. A lot of things that we used to do in charcoal and ink are now done in Photoshop or GIMP. These and other digital art programs are full of powerful features.

But a keyboard and mouse are a terrible way to create art. They’re fine for photo-editing and applying effects. But if you actually want to draw something, a mouse is one of the most awkward ways to do it.

For this reason, tablets have become a popular way for creators to do their work. That said, tablets aren’t an ideal solution for many applications. Most importantly, they’re lacking in power compared to a laptop or full-sized desktop. A better solution is to pair a touchscreen tablet display with your full-sized computer. That way, you’ll be getting the best of both worlds.

Today, we’ll be reviewing the GAOMON PD156 PRO Drawing Tablet. This is a dedicated tablet designed specifically for graphic artists. It has a set of customizable control buttons, along with a stylus and a backup set of nibs. It also has a highly-sensitive touchscreen that allows for different brush angles and pressures.

But there are many features that make up a good drawing tablet, and these are just a few of them. To find out how well the PD156 really works, we’ll have to look at the physical build. We’ll have to talk about how it connects to your computer, and what it’s compatible with. Let’s get started, and see what we learn! 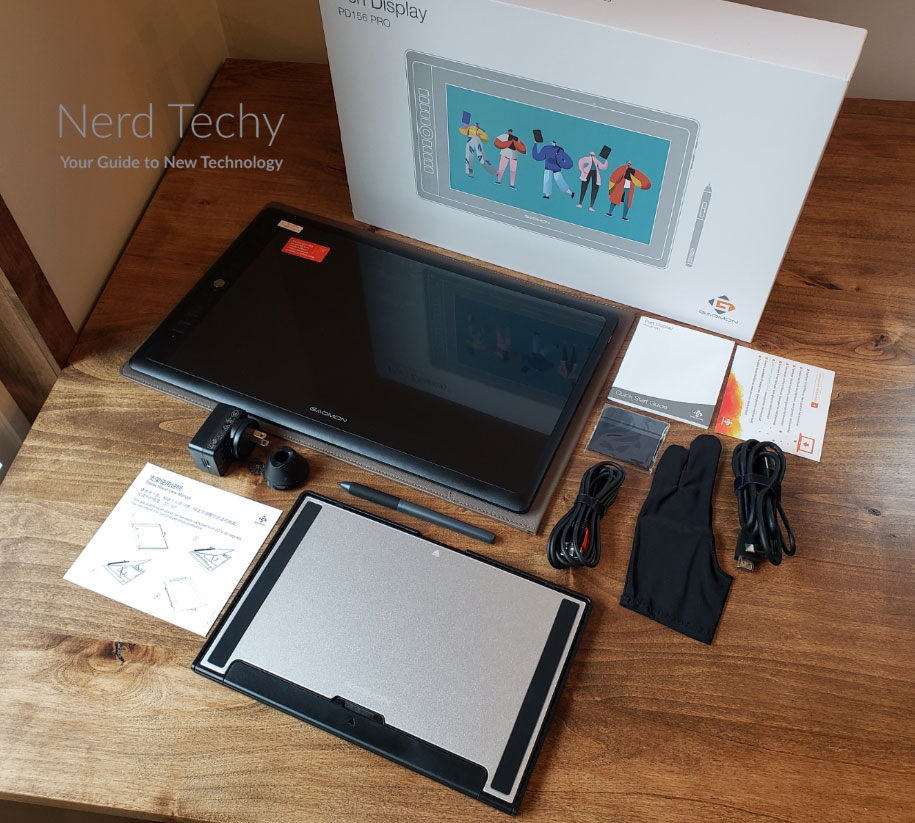 The GAOMON PD156 PRO Drawing Tablet has a broad black housing. It’s rectangular in shape, as you might expect, with a fat bezel around the edges for protection. Inside the bezel, there’s a wide black border surrounding the 15.6-inch touchscreen display.

The only branding or significant marking is a white “GAOMON” imprint at the bottom of the screen. The left portion of the bezel is much wider, with a set of buttons in a vertical column. We’ll talk more about these in a minute. 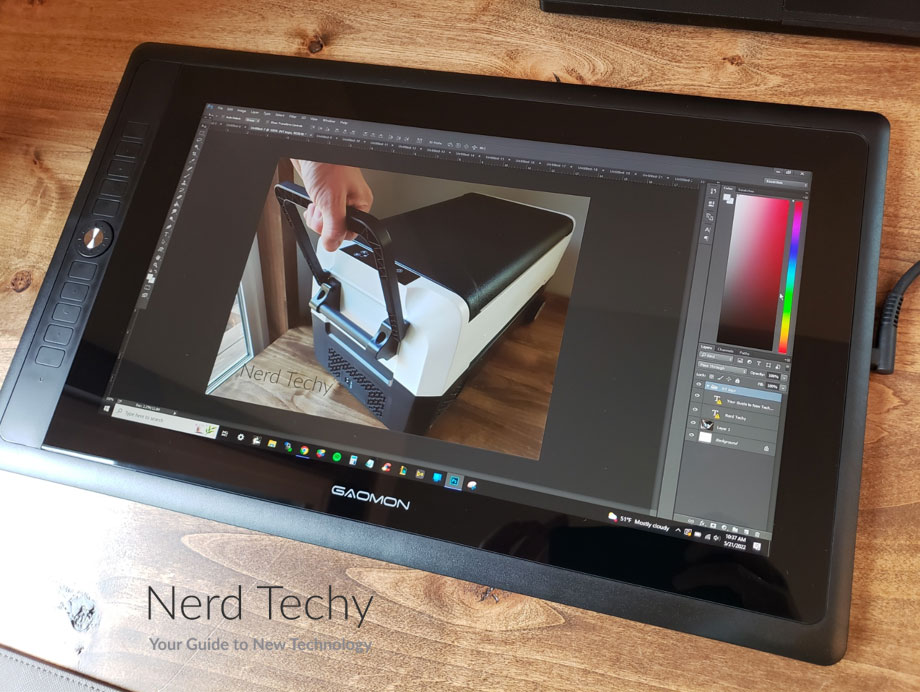 At the top of the right edge of the housing, you’ll find the power button. Just beneath this, there’s a toggle button with upper and lower portions. This is used to adjust the brightness up and down. Beneath this is a USB Type-C port, used both for power and for connectivity.

The package includes a stylus, which is the same size as a normal pen and easy to hold. When it’s not in use, it sits in a rubber base. This base can actually be opened up to reveal a storage compartment with eight extra nibs. That’s enough for several years of regular, everyday use. 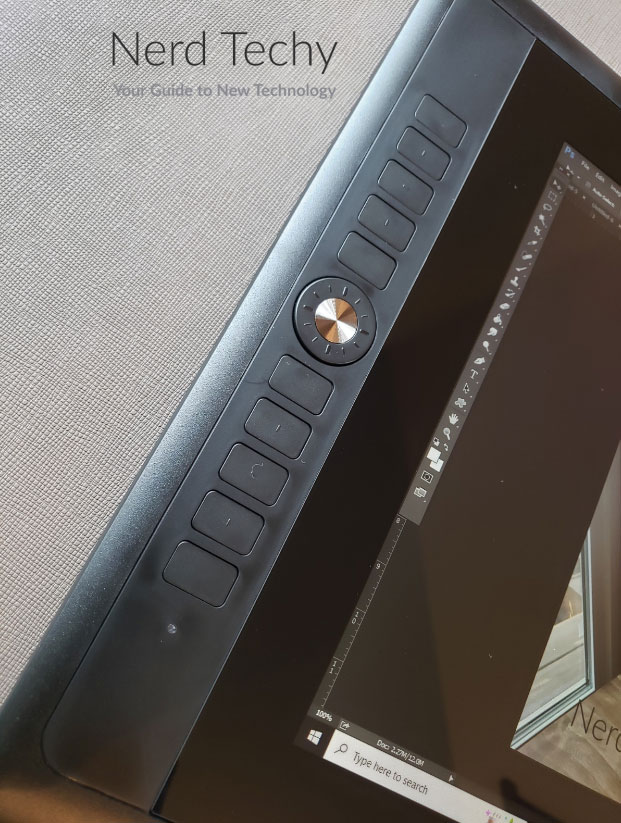 Also included in the kit is an adjustable tablet stand. This is a simple black plastic stand that opens like a book, and has an adjustable metal support. By moving the support between different positions, you can adjust the angle of the screen between 14.5 and 45 degrees. And everything is protected by a 12-month manufacturer’s warranty, so you’re safe from any premature defects.

If you’re looking for something a little bit toucher, check out the Panasonic Toughbook G2. It’s not designed for artists, but it does have its own OS installed. And since it’s built like a brick, it’s the perfect choice for field work. 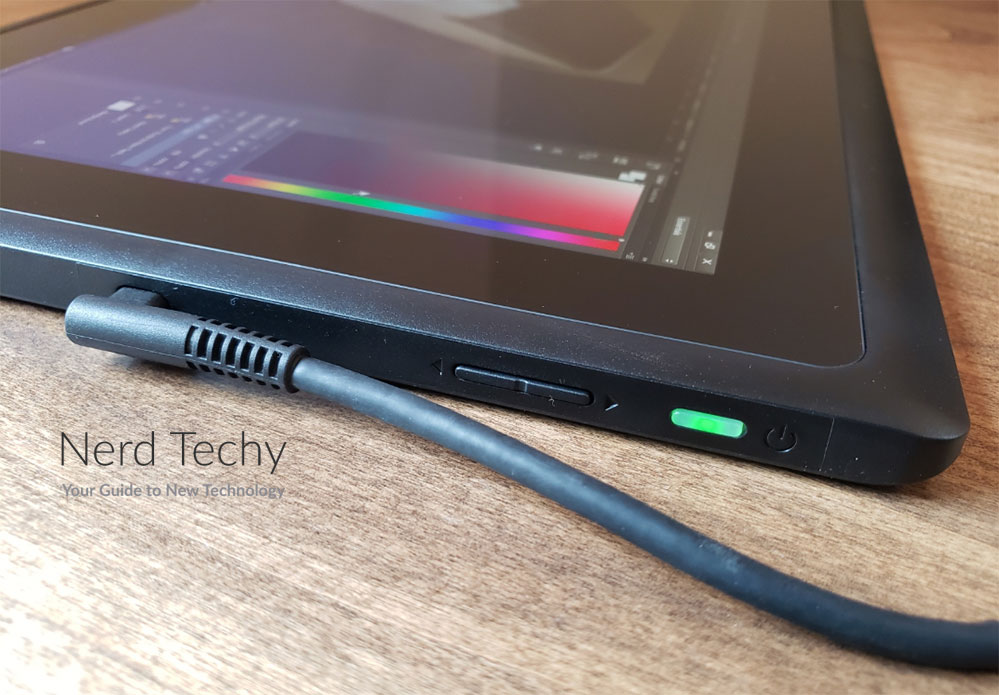 There’s a total of 10 buttons on the left side of the screen, split with five on top and five underneath. The top nine buttons are programmable, and can be set to any shortcut you want. The bottom one is used to control the customizable scroll ring in the center.

This scroll ring works in one of two modes. First, it can be use to open and navigate the tablet’s menu. But when the bottom button is pressed, it activates OSD mode. In this mode, the scroll ring can be used for all kinds of applications. 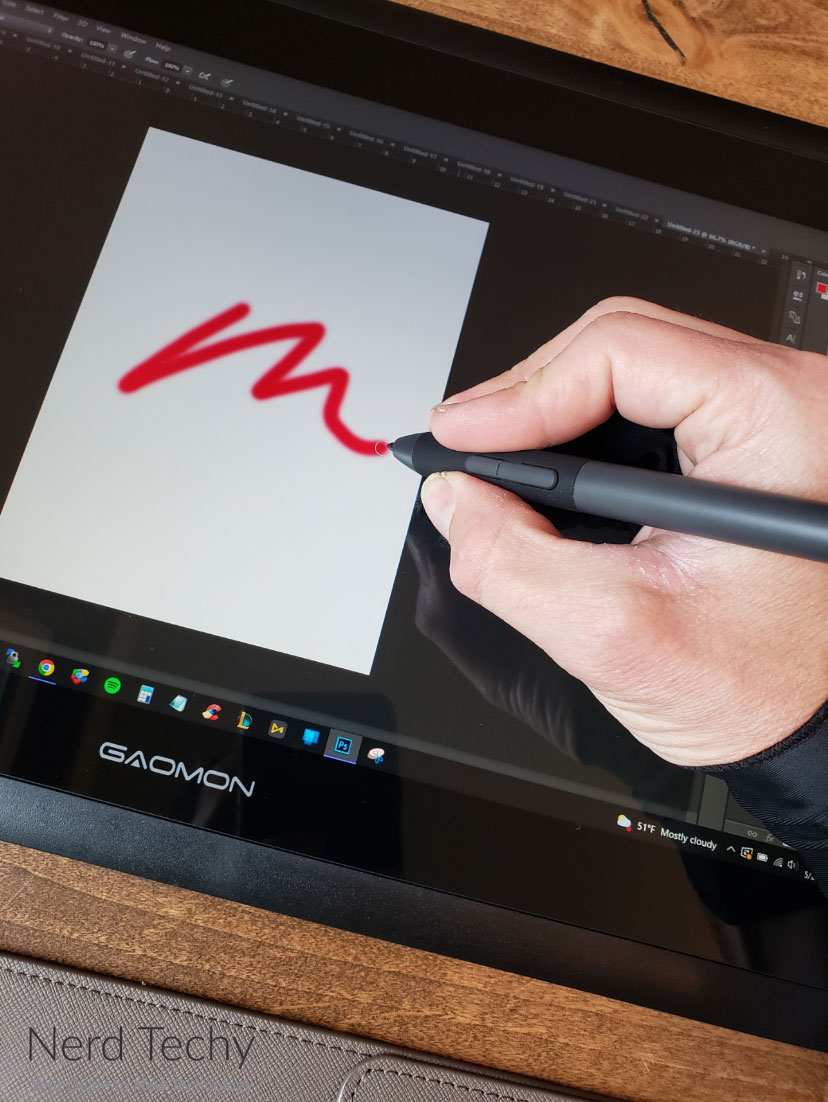 By default, the little round button in the middle changes between different functions. Depending on the function, you can use the wheel to zoom, adjust the brush, scroll the page, or adjust sizing.

In addition to all of those functions, there are also a pair of programmable buttons on the stylus. These are meant to be operated with your thumb, and can easily be used while you’re working. By default, one is a right mouse click, and the other switches to eraser mode. 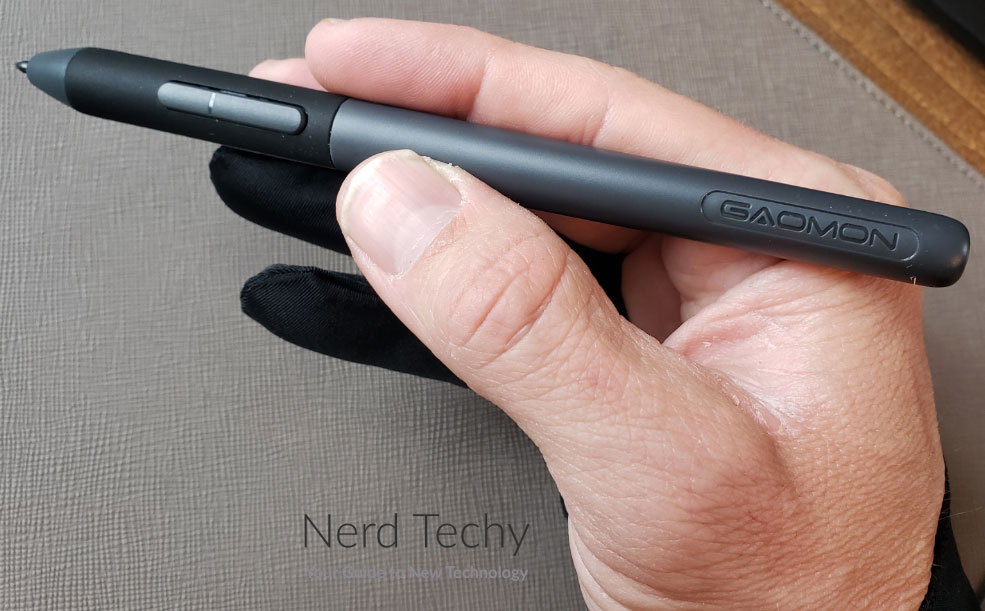 The screen itself is very sensitive. It’s fully-laminated, which means the top glass and lower touch-sensitive surface are in direct contact. There’s no gap, so your stylus hits exactly where you tap. The screen has a report rate of 266 cycles per second, so it can detect smooth and fine movements.

The display also detects stylus tilt angles up to 60 degrees in any direction. This allows you to make natural strokes to broaden or narrow your tip, just like a real marker. And the screen detects 8,192 levels of pressure sensitivity. This is as close as a digital display comes to replicating the feel of physical drawing. 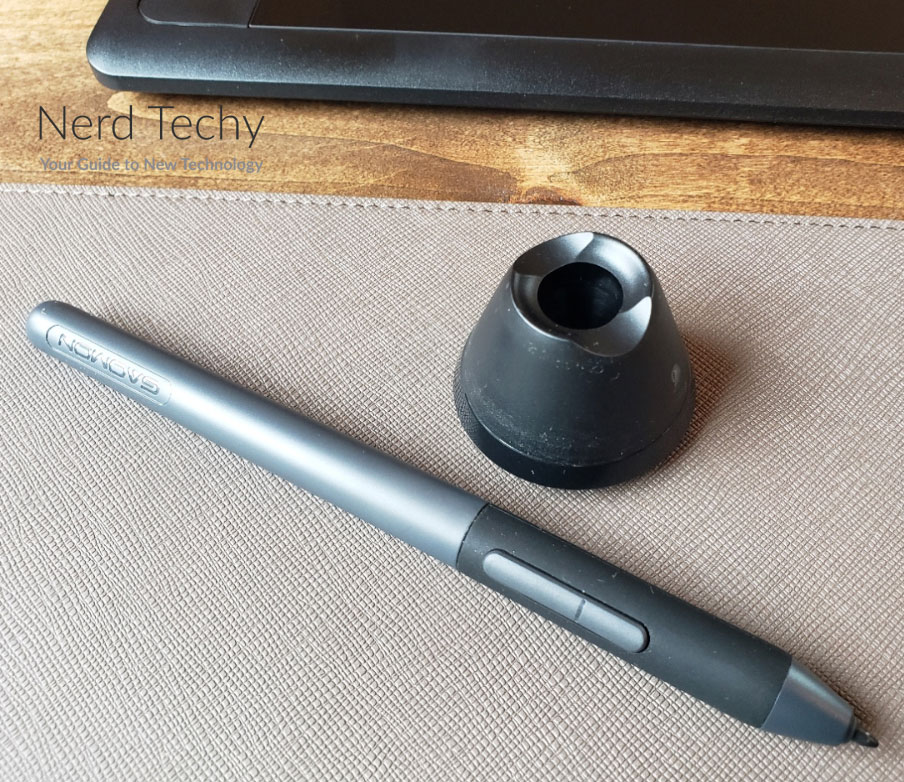 The PD156 PRO connects to your computer with a unique split cable. At one end, there’s a USB Type-C plug, which goes into the side of the tablet. This plug has a 90-degree angle, with a split wire coming out of it.

One half of the cable ends in an HDMI plug, and the other ends in a USB Type-A plug. Both need to be plugged in; the HDMI for video, and the USB for power. Most PCs will have enough power to run the tablet without any issues. However, many laptops won’t have sufficient power. In that case, you can plug the USB cable into a wall power adapter or power bank. 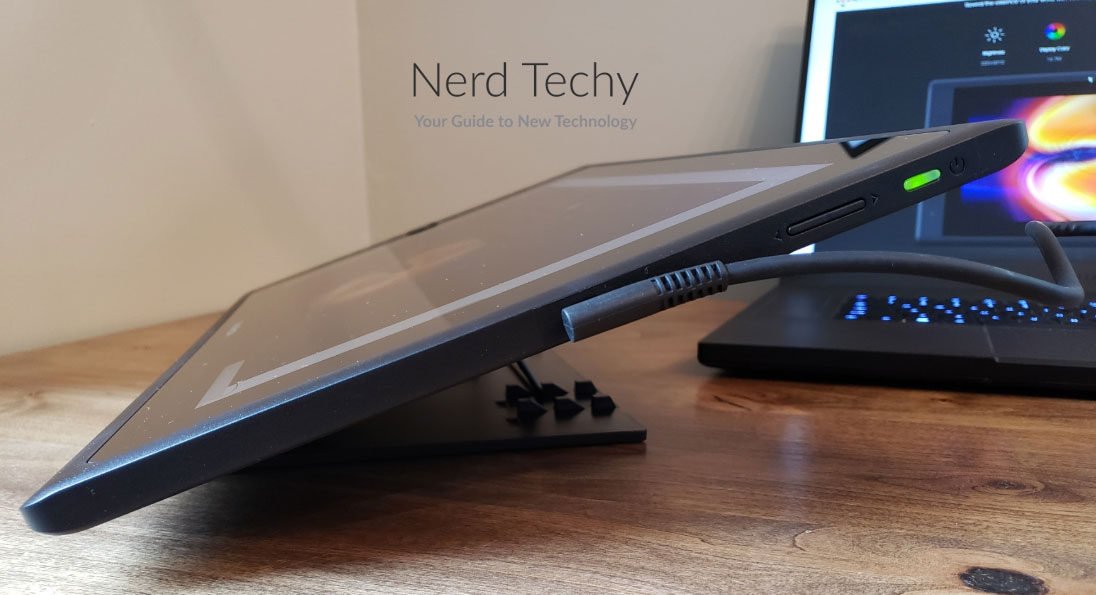 This tablet is compatible with almost any modern desktop or laptop. It works with Windows 7 and later, as well as with Mac OS 10.12 or later. In order for all the functions to work, you’ll need to install the drivers for your system. Thankfully, these are free to download on GAOMON’s website. Keep in mind that there are no drivers for Chrome OS at this time, so it won’t work with Chromebooks. 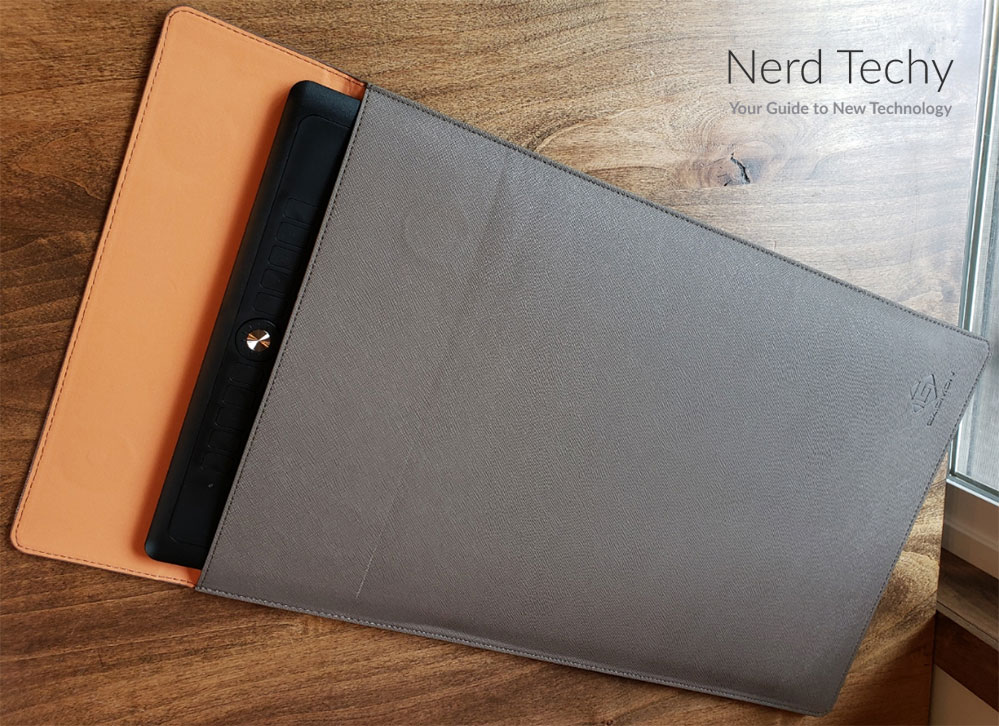 Along the same lines, you’ll get good compatibility with almost any drawing program. Photoshop and GIMP support are a given. But you also get support for Illustrator, SketchBook Pro, MediBang Paint Pro, SAI Version 2, Krita, and Firealpaca. Unless you’re using some truly unusual software, using the custom buttons will be simple. 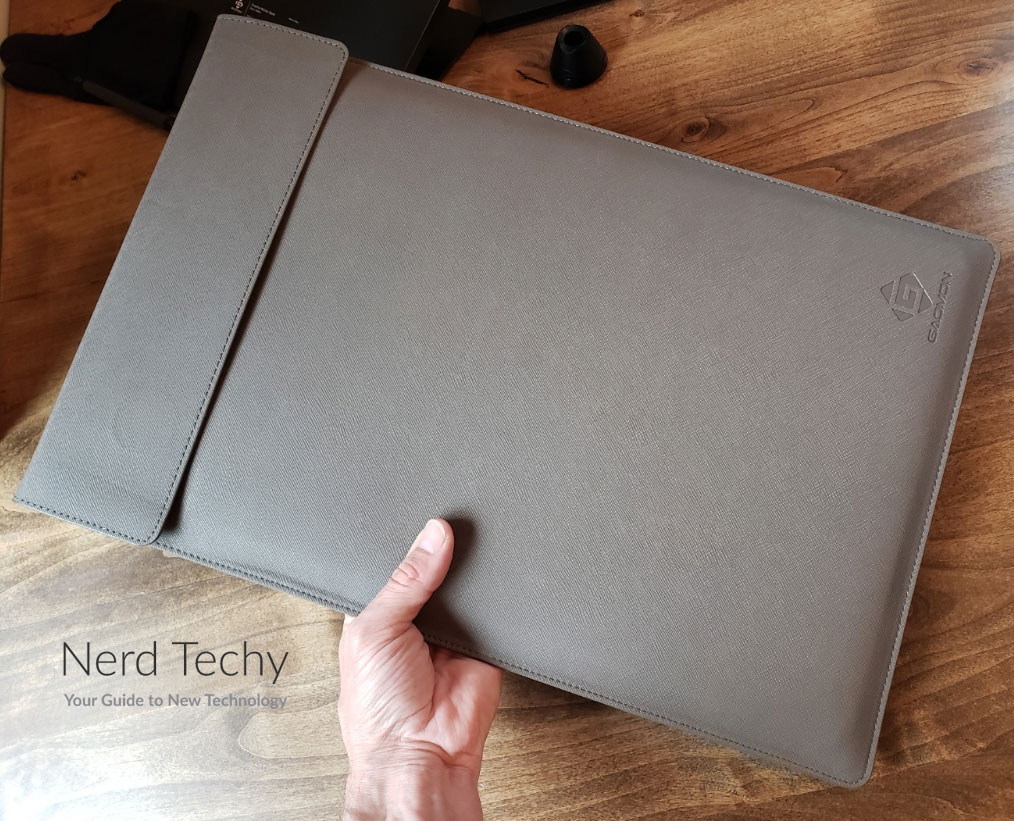 If you need a tablet with wider compatibility, consider the XP-Pen Artist 12. It’s an older model, and it’s a little bit smaller and more awkward to connect. However, it supports Chrome OS, Linux, and Android. This gives you the freedom to use it with Chromebooks, custom computers, and even some tablets. 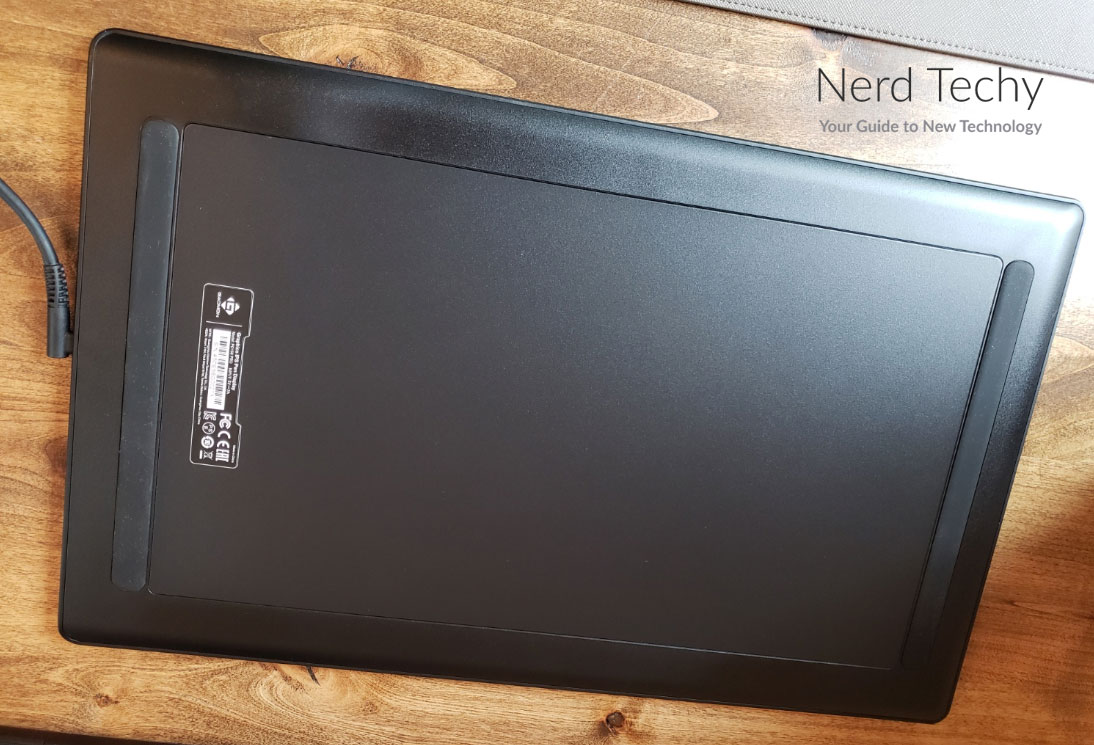 The display resolution on the PD156 PRO is 1,920 x 1,080 pixels. That’s standard 1080p, which is more than good enough at this size. At 15.6 inches, the pixels are already small enough that you’re basically at maximum resolution. The human eye can’t distinguish higher resolutions, at least not unless you’re staring at it from 2 inches away.

The IPS display technology allows for a very wide viewing angle. You’ll see clear, true color, even if you’re viewing at an angle of 89 degrees. There’s no distortion or negative effect as you move off center. 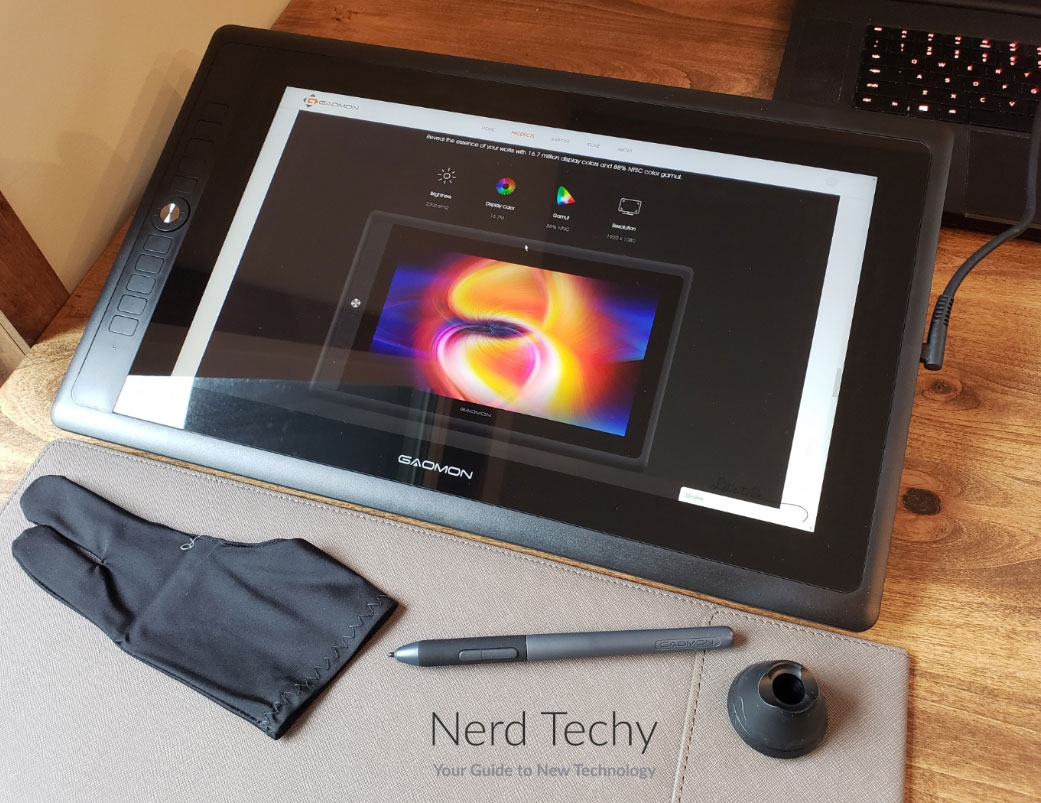 GAOMON doesn’t provide a refresh rate for this monitor in their specs. Then again, this isn’t a gaming monitor, so refresh rate isn’t much of a concern. As far as we can distinguish, it seems to run at 60Hz, which is just fine for drawing purposes.

If for some reason you really need a better-than-1080p tablet, there are options. The XP-Pen Artist Pro 16TP is a great example. It has an absolutely stunning 4K display, with wide compatibility for operating systems and software. On the downside, the screen is hyper-sensitive and easy to actuate by accident. 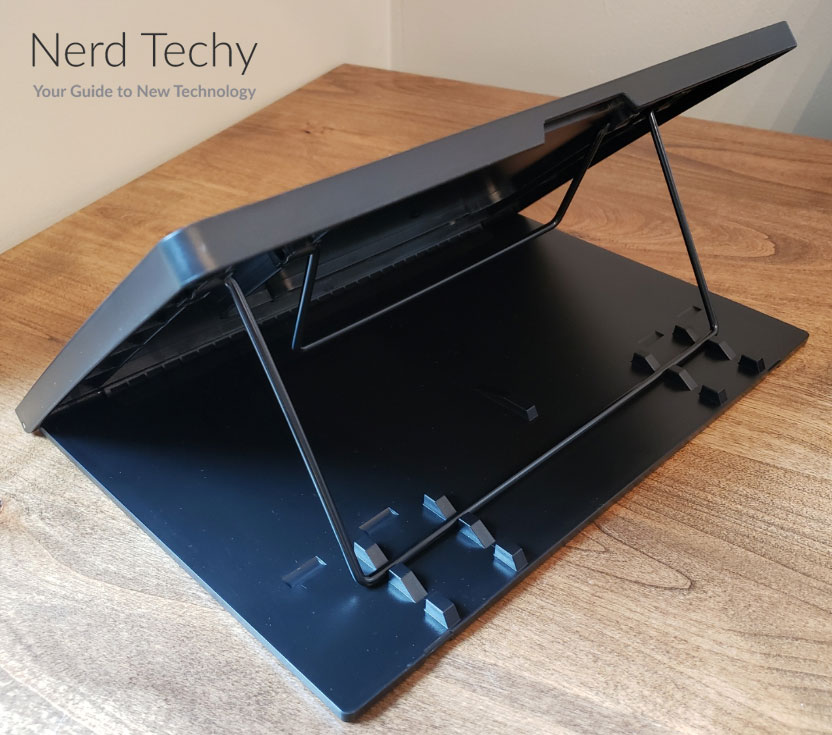 The PD156 PRO has a maximum screen brightness of 220 nits, which is medium-low brightness. It’s fine for indoor environments, including well-lit ones. But if for some reason you’re working in direct sunlight, you’ll have some issues with visibility. 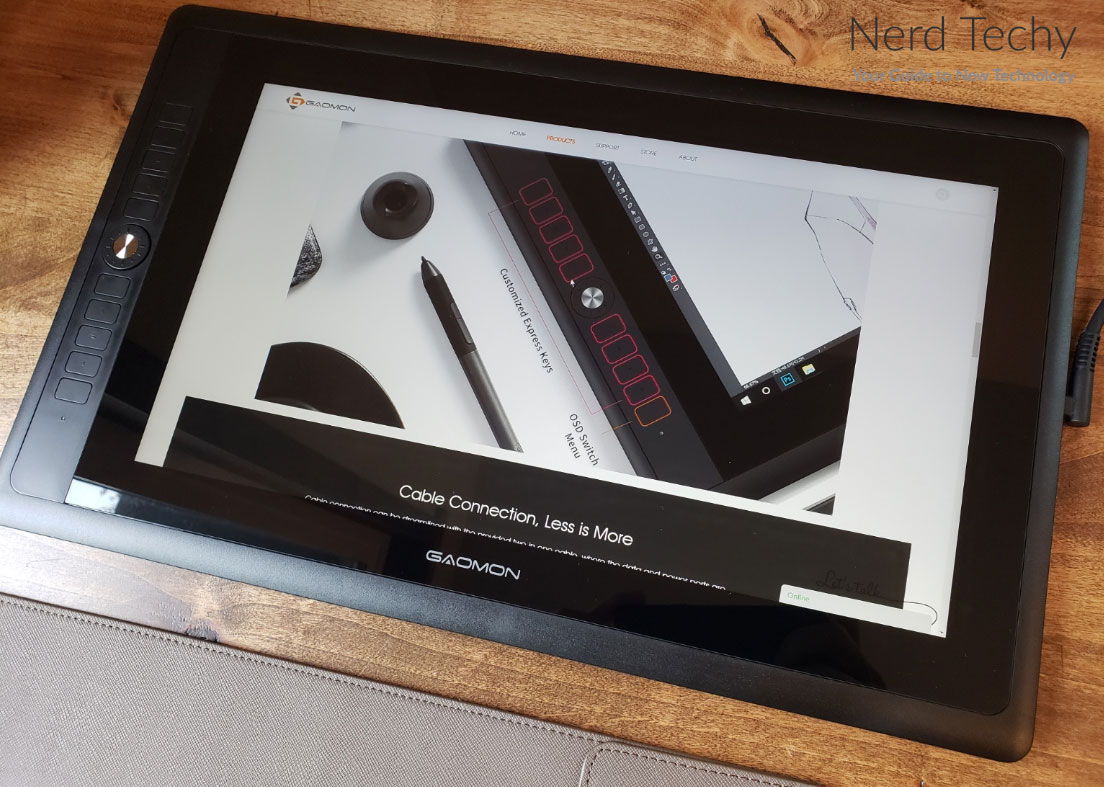 On the plus side, you get a contrast ratio of 1,000:1. This is a measure of the difference between the brightest and darkest tones on the screen. If you’re working with a lot of dark colors, a high contrast ratio makes them a lot easier to distinguish.

Colors on the display are bright and vibrant. More to the point, you get a wide color gamut of 88% of the NTSC color space. That’s roughly equivalent to 88% of the Adobe RGB color space, so it’s good enough for prints. Even better, it far exceeds 100% of the SRGB color space. So if you’re working for digital-only applications, you’ll have all the colors you could possibly ask for. 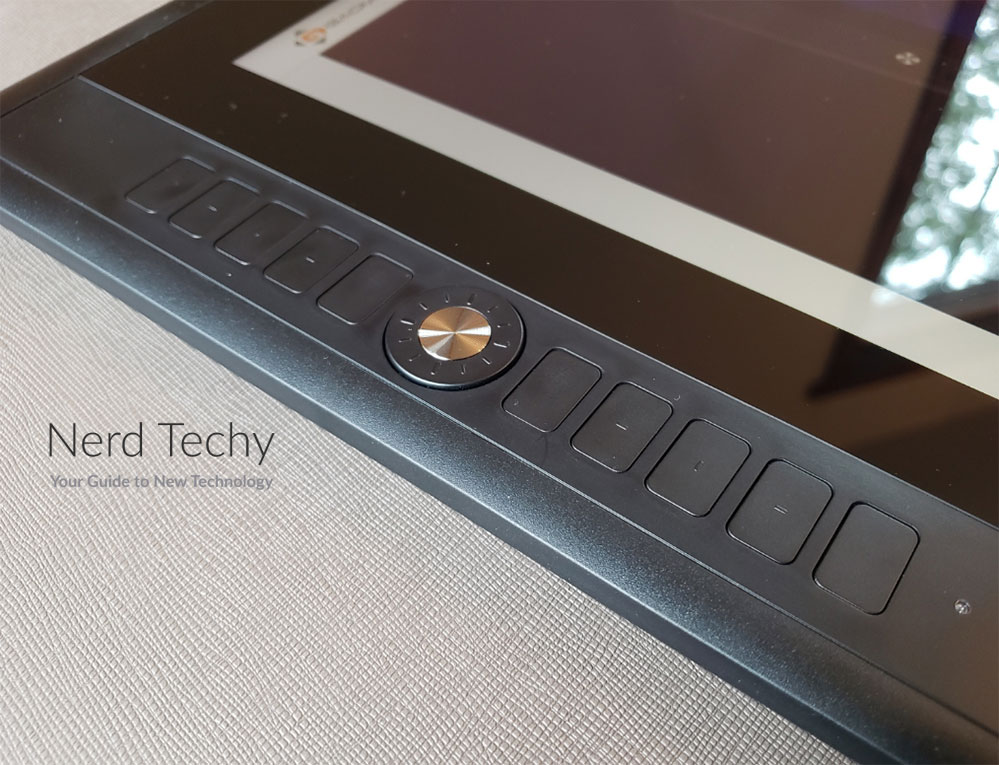 The GAOMON PD156 PRO Drawing Tablet is a powerful tool for any digital artist. It’s durably engineered, with all the customizable controls you’ll ever need. It has a wide color gamut and color angle, and crisp, clear pictures. And with a sensitive, laminated screen, it feels like you’re working with actual ink. Working in your favorite drawing software has never been easier.

Also, be sure to checkout the PD156 on GAOMON’s official website. While you’re at it, check out their YouTube channel as well.

Known as the “Tech Guru”, he’s an expert of current and trending technology. Here at NerdTechy, he makes tech easy to understand for the average person.