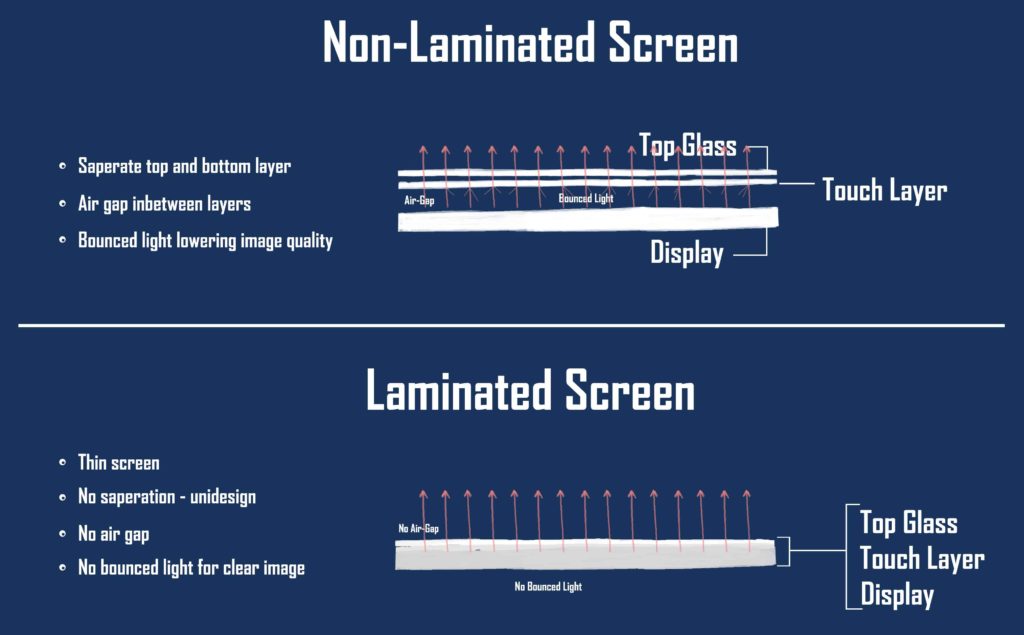 In conventional non-laminated displays, the screen sit at the bottom. And the touch panel and top glass layer are stuck together. With this kind of arrangement, an air gap builds up between the two layers. The air gap causes disturbances in the light coming in and out of the screen. These disturbances affect the quality of the image produced.

The top panel of our screen has three basic layers which consist of a display panel, touch layer, and top glass. The display panel is present at the bottom of the sandwich followed by the touch layer. The touch layer essentially makes our device touch sensitive. On the top, most glass layer is the protective layer which protects the bottom layers and usually has scratch resistant properties.

Most of this display is easy to disassemble, they are normally fixed with clasps. If you want to change a screen, just snap the buckle. However some are fixed with glue, then you need to change the display integrally.

Compared to the screen covered with a glass, it has a lower reflectance. You can have a better view angle even under a strong sunlight, sometimes it depends on the maximum display brightness.

Because the plastic frame is a bit higher than the screen, so it has a better protection to the screen when falling down.

Adopted with IPS material, it has a stricter manufacturing process than a TN screen, due to the IPS pixel arrangement rules, the edge of this screen has the issues of light leak and whitening when it’s on the pure black background. 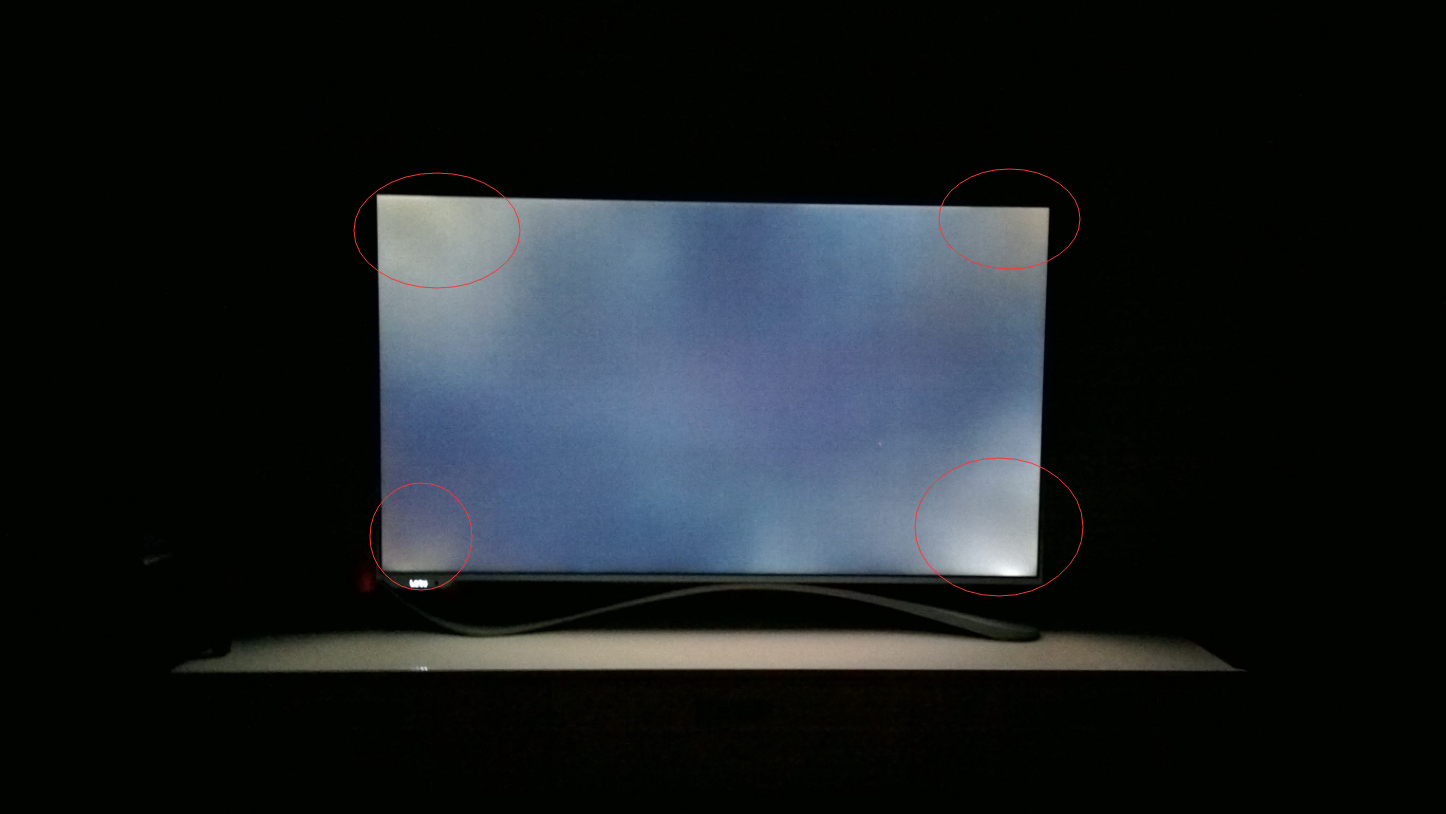 When the screen is off, you glare at the screen directly, it’s a gray one. While the laminated screen is almost a black one, which could give you a more comfortable sense of view. 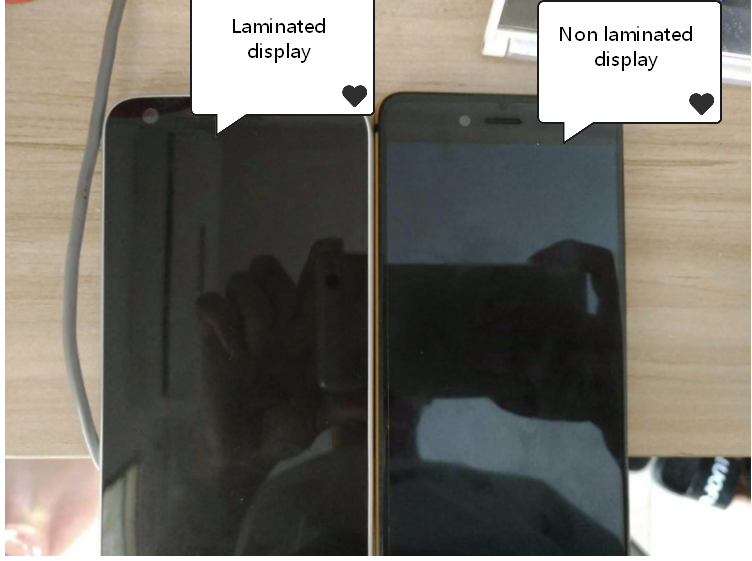 One of the main advantages of the laminated screens is they are very thin, that enables Apple to make iPads and iPhones so slim.

As the device gets older, dust particles will be hiding inside the air gap, giving the screen a dusty appearance. These dust particles cannot be cleaned without opening the device. Laminated screen completely eliminates this issue.

If you are one of those people who uses tablets for drawing or taking notes. You might have noticed the hollow sound it makes when the stylus taps the screen. This effect is more evident in older generation iPads and drawing tablets. Some artist finds it really annoying. The laminated screens do not completely remove the tap sound but definitely reduces the hollow effect. In other words, the tap sound it makes is more pleasing.

No air gap between layers means to room for light refraction or light interference, making the screen clear and vibrant. This is one of the most important things, because it’s visible when you observe closely. Still improves the viewing experience in a major way. If you have an older smartphone you’ll notice the actual screen appears a few millimeters below the surface. Looking at those screen feels like we are peeking into the screen through some top layer. The image on the laminated screens appears as they have been painted on the top glass. They look more attracting and real.

Many of the drawing tables usually suffer from a common issue called parallax. In parallax – the line appearing on the screen is a few millimeters away from where the actual pen touches the surface. It deteriorates the drawing and writing experience. This mainly happens due to the gap between the top glass and the display layer. This effect is minimum in iPads and most of the Android tablets, mainly because these devices have small screens. In professional drawing tablets, such as GAOMON PD2200 and GAOMON PD156 PRO, come with laminated displays with no parallax. They have eliminated this issue, you get what you draw.

Although both laminated and normal one is almost made of the same base materials but the main difference is in the manufacturing process. Laminated screens are more complicated to make and that is why it costs more.

All the merits and faults are above, the laminated displays are becoming the popular trends. It has a better display quality and great visibility in strongly light environments and under the sun and a supreme appearance performance. With its cost decreasing, it will be applied more in electronic devices.

If you have any question, please contact us via email: service@gaomon.net

How to unlock OSD menu of GAOMON PD2200 Pen Display