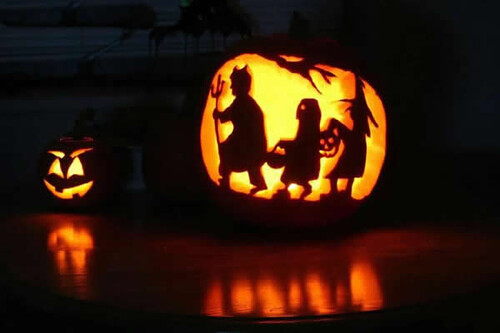 Like many other holidays, Halloween has evolved and changed throughout history. Over 2,000 years ago people called the Celts lived in what is now Ireland, the UK, and parts of Northern France. November 1 was their New Year’s Day. They believed that the night before the New Year (October 31) was a time when the living and the dead came together.

This day marked the end of summer and the harvest and the beginning of the dark, cold winter. Celts believed that on the night before the new year, the boundary between the worlds of the living and the dead became blurred. On the night of October31, weird creatures with strange powers could wander about on Earth. Then the Celts had a big party. It was all about scaring away the ghosts and spirits. Later, with the Christian religion, the day became known as All Hallows’ Eve – the day before All Saints’ Day on 1 November.

How to Celebrate Halloween

If you decide to host a party, encourage your invited guests to show up in costume. You might select a particular theme, such as vampires or Star Wars characters, or you could simply let everyone show off their creativity in a costume of their choosing. For larger parties, you might even hold a contest and have the other partygoers vote on their favorite costumes. Offer prizes for different categories, such as “overall best,” “scariest,” “funniest,” and “most clever idea.”

Set out trays piled high with tantalizing sweets like cookies, cupcakes, and chocolates, or keep it simple with a few baskets of candy. If you have a knack for food decoration, this can be a great opportunity to conduct mad science experiments on your own Halloween-themed confections, such as candy apple skulls, vampire fang cookies, and layered candy corn parfaits. Don’t forget to also provide a few nutritious snacks, like a veggie tray or some homemade granola bars, for your more health-conscious guests.

Bobbing for apples is a traditional autumnal game enjoyed by people of all ages. It requires nothing more than a large tub of water, enough apples to cover the surface and a group of people willing to get their faces soaking wet. A variation of the game includes hanging apples from strings and attempting to catch them with your teeth as they swing and sway. Each game is a lot of fun to play, and they are great activities for your next Halloween party.

Give Out Candy on Halloween

Halloween wouldn’t be Halloween without tons of candy—and the people who hand it out! If you’re on candy duty this year, be prepared for lots of fun costumes and get ready to make kids’ nights with some sugary treats. Buy a couple of bags, pop in a scary movie while you wait, and get ready to jump up when the trick or treaters come knocking!

Many TV stations run Halloween movie marathons, so settle in, watch a few horror flicks, and take it easy. Many online movie streaming services bulk up their Halloween offerings around the month of October, so you should have plenty of movies to pick from. There are a lot of new television series that have a scary twist to them, like American Horror Story and Supernatural. Try watching one of those if you can’t find a movie you like.

There are many collections of short scary stories available, and you can find many of them at your local library, or online. Spend some time reading scary stories to give yourself a good scare without leaving the house. There are also a good amount of podcasts you could listen to that tell scary stories. This could be especially fun to do in the dark with your headphones on. Some popular collections of scary stories include the Scary Stories to Tell in the Dark series.