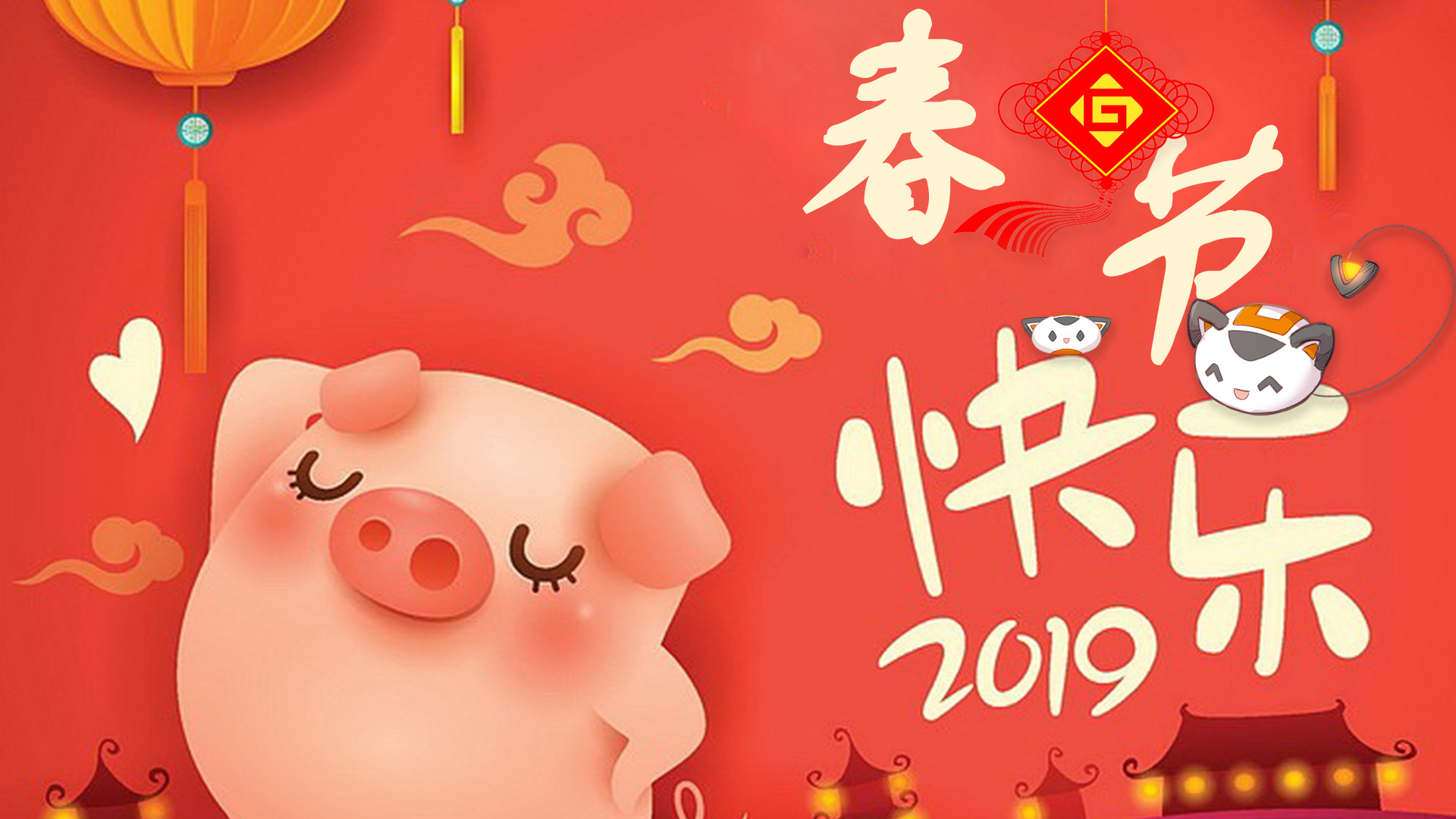 When is Chinese New Year?

Chinese New Year (Spring Festival in Chinese) is a big holiday for Chinese people. Almost all Chinese will go back their home to have an annual family reunion. Some people’s home is thousands of kilometers away. To back hometown they need to take trains or cars for a few days. Some may need to fly for more than 5 hours or even more.  Thus they have to buy tickets a month ago in order to arrive home before the right holiday.

The main passengers are students and workers who are studying and working not in their hometown. With the Spring Festival approaching, the tickets of trains, cars, or even planes are often sold out and the biggest human migration on Earth (called as Chun Yun in Chinese) is beginning also and will last almost 20 days until the end of Lantern Festival.

The date to celebrate Chinese New Year is shifting each year, which is different from Western New Year that is celebrated on the first day in the solar calendar. It is on 5th February in 2019 and will last 15 days until the end of Lantern Day. However, the preparations are made 10 days before its start.

The 12 Zodiac signs (Aries, Taurus, Gemini, Cancer, Leo, Virgo, Libra, Scorpio, Sagittarius, Capricorn, Aquarius, and Pisces)  are famous and play an active role in the astrological system.  They correspond to the 12 months of the year. However, do you know there is another Zodiac system which not only corresponds to 12 months of the year but also to 12 years? It is Chinese Zodiacs ( called as ‘Shēngxiào‘ in Chinese) which assigns 12 animals to 12 years in a specified order.

The Chinese Zodiacs’ order, which is chosen by the Jade Emperor through a running race in an ancient Chinese folk story, is Rat, Ox, Tiger, Rabbit, Dragon, Snake, Horse, Goat, Monkey, Rooster, Dog, and Pig and this year is Pig’s turn. Then it is named as the year of the pig in China.

In the year of Pig, many pig mascots will appear on the streets, in the shopping malls and present packages, pictures, etc. This is one of the decorations to celebrate the coming new year.

The myth of Chinese New Year 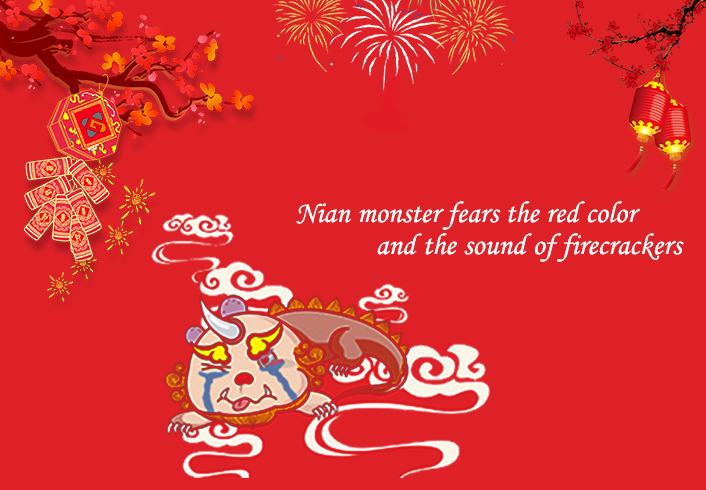 There are many myths about the origin of Chinese New Year. The common one is about Nián (年) monster.

The story is set in an ancient village where people had to rely on nature to get their food. Therefore, they didn’t have advanced arms, like cannons, guns to defend their houses. Nián (年) monster was one of their biggest threats. The giant beast was believed to live under the sea. He often went out to eat children, adults, and other animals annually on a specific day. Each time he visited the village, all houses were destroyed, all livestock was killed, etc.. Each time before he arrived, all villagers escaped into mountains to hide.

Nián (年) threated villagers a lot. The villagers gathered to think out many ways to make Nián leave them in peace. But no one expelled the giant beast away until a young stranger visited this village on the eve before Nián (年) came. The young man required a place for a rest. He told villagers he had ways to expel Nián. However, no one believed him and all went to hide, leaving the young man alone in the village. They believed he would be eaten by Nián.

However, after Nián leaving, they returned their village and found the young man was still alive. They were so happy and surprised and asked him the ways to horrify the beast away. The man told them that Nián fears red things and sound of firecrackers. Since then, when Nián (年) comes, people will wear in red clothes, decorate everything in red, lit up firecrackers to horrify away the beast.

Red color is the main color on Chinese New Year. It is similar to fire and stands for prosperous family members and booming lives. People believe it could bring good luck to them also. Thus almost every decoration is in red. The main color of all pictures, notifications, TV programs, etc. is red.

Lanterns are in red and are hanging all along the streets and each house. People often wear red clothes to avoid bad gods who might make people ill and bring misfortune to people. Red Spring Festival couplets are glued on the sides of the doorframe. Red cut papers are stuck on the windows.

Six or Seven days before the Eve of Chinese New Year (January 28th, 2019), people will worship the stove god who returns to Heaven and does his annual report to the Jade Emperor. The firecrackers are lit on this day. The candies used to worship the stove god will be eaten by children. They are believed to take good luck and protect children from harm and diseases. Then people will do some cleanings. This is an annual cleaning. They sweep their ceilings, floors, windows, doors, etc. almost everywhere around their house. 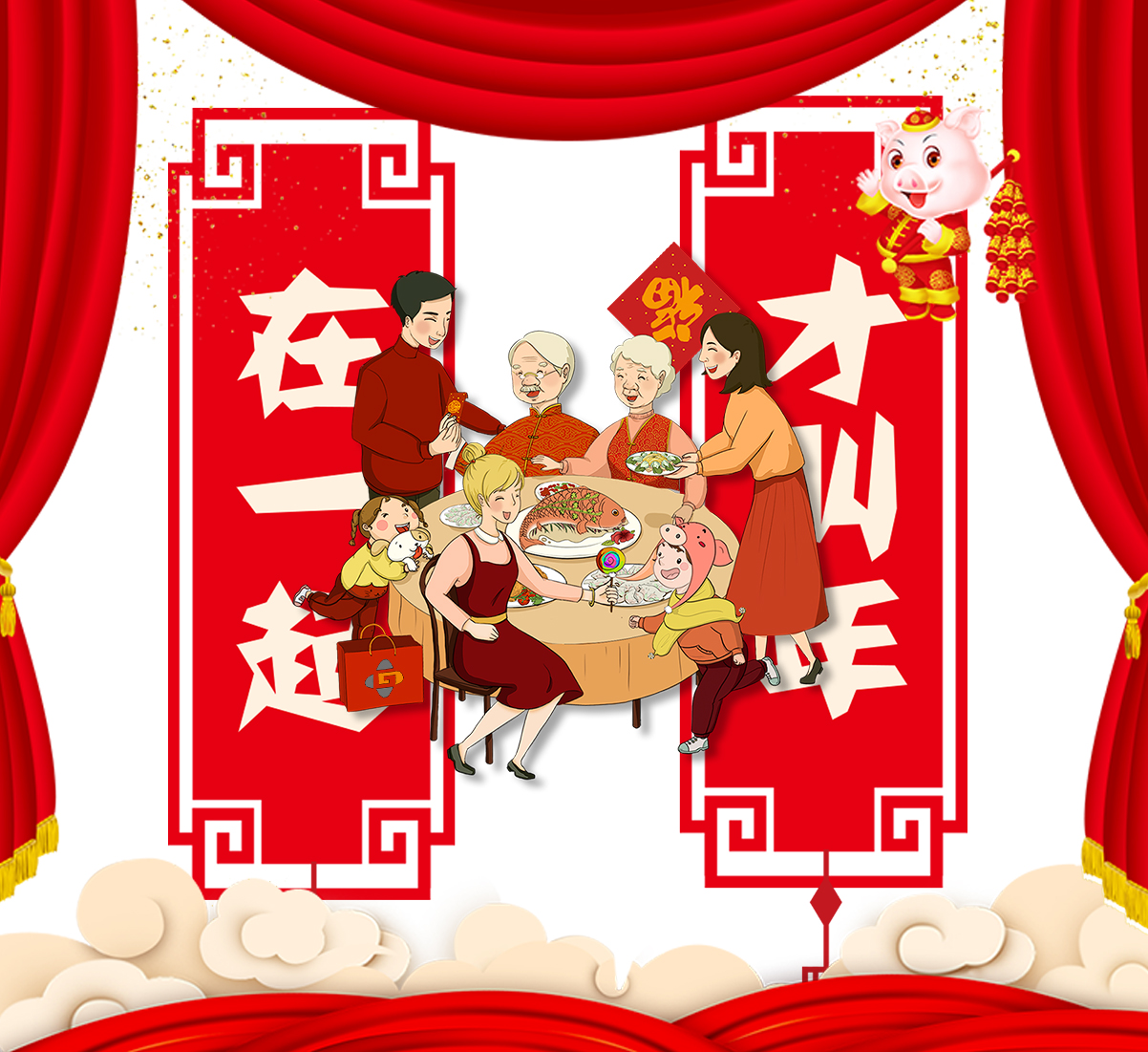 After the cleaning of their house, they begin to make plenty of food for the Eve dinner (February 4th, 2019). Some cuisine will take 3 or 4 days to finish. Some might even longer. The dishes are eaten on the Eve dinner which is also called as the annual family reunion dinner.  This dinner is extremely important to the Chinese. All families must come back to have this dinner.

The dishes are prepared plenty enough for them to eat through almost 10 days. If you visit a Chinese friend 10 days after the Eve, you might find there is still some food remaining. Dishes are mainly meats, including pig, duck, chicken, fish, etc.. They also prepare some vegetables. The cuisine list for the New Year is so long. Almost every food has a good wish.

Fish is on the dinner list. Fish has the same pronunciation as 余（yú）which means ‘surplus’ or ‘extra’ in Chinese. It is used to blessing as 年年有余 (Nián nián yǒu yú) with a good wish that you will have plenty of money and food every year.

Now some families often have dinner in restaurants. The festive air is not strong in cities. To have a strong festive air, you should visit the villages.

Some fireworks are prepared. They are believed to take good luck to earn big money in the coming year. Firework sound is heard beginning at the stove day (January28th, 2019) in the villages. On the Eve (February 4th, 2019), people often lit fireworks at 00:00 (February 5th, 2019) after the countdown. Firework sound is rising around China. All sound is overwhelmed by firework sound. After this time, people will go back their bed.

After a night rest, they will go out to worship their ancestors who are buried on the hill. All are in new clothes and shoes. Fireworks are lit up at each tomb. The air is full of gunpowder ( which is used as one element to lit up the firework).

The end of Chinese New Year

When they are still home during the holiday, they will play cards, visit relatives & friends, watching New Year Galas, visiting temple fairs, etc. This holiday is the time for all Chinese to have a rest except doctors, nurses, cleaners, soldiers.