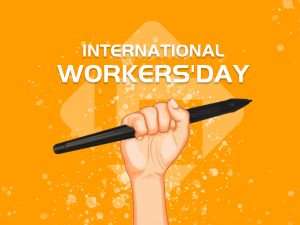 On May 1, many countries will have a one-day off to celebrate International Worker’s Day. Adding the weekend, it turns into a three-day vacation. It’s a good chance to have a rest or have a trip. Some would stay home. Some might step out on the streets to appeal for more rights for workers. In my book, Labor day is a day that our children will have a break and return home to help parents to do farm work in spring. However, surprisingly, this holiday is definitely to commemorate an event happened in America, and more surprising, it, in fact, is celebrated in September instead of May 1 by Americans. Some also say it has a pagan root to celebrate the coming of spring. Then why?

At the very beginning, workers had to work overtime more than we could think out. The movements of appealing for shorter hours appeared and met with great employer resistance. In Britain, until 1847, working hour of women and children was limited to 10 hours per day. Not until World War I, the eight-hour day and the six-day 48-hour week was established as a standard in American factories. International Worker’s Day was to commemorate one of the movements, Haymarket Affair, happening during the struggles for shorter working hours.

Haymarket Affair also called Haymarket Riot or Haymarket Massacre was entirely a mysterious event. The Federation of Organized Trades and Labor Unions called for May 1, 1886, to be the beginning of a nationwide movement for the eight-hour day. People paraded on the streets on May 1. Rallies were peacefully moving until May 4.
On this day, people gathered at the Haymarket to asked for their rights. As it was beginning to rain, people almost left the Haymarket and only about two hundred remained. Then 176 policemen acted to disperse these people but an unidentified person exploded a bomb. Police responded with random gunfire in the darkness. Seven policemen were killed and 60 others wounded in this event. The number of civilians killed or wounded was unknown. The Haymarket Riot had a lasting effect on the labor movement. Many leaders were arrested. It inspired generations of labor leaders, leftist activists, and artists and has been commemorated in monuments, murals, and posters throughout the world.

In 1889, the Second International held a meeting in Paris. May 1 was chosen as the date to commemorate the Haymarket at this meeting. In the Soviet Union, leaders embraced the new holiday in the believing of it would encourage workers to unite against capitalism. It became an official holiday in 1933 in Germany. Now, this day is celebrated in many countries and to commemorate the historic struggles and gains made by workers.
However, Americans celebrate it on the first Monday of September. This is due to the president Grover Cleveland. In consideration of that May 1 would remind people the Haymarket was a bombing event, officials designated the alternative September date as Labour Day in 1894. It’s more to celebrate an end of summer in America. Graduation season ends and new school academic year starts from September. Few know the Haymarket Affair.

May 1 was already celebrated around the world to commemorate the Haymarket Riot but it, indeed, has a pagan root if trying to trace back from celebrations remaining today. From its pagan root, it was the celebration of the return of spring and the end of the winter half of the year in the Northern Hemisphere. The observance probably originated in agricultural rituals. Although celebrations have varied widely and largely different from its beginning, there are some relating to Spring. For example, the gathering of wildflowers and green branches, the weaving of floral garlands, the crowning of a May king and queen, and the setting up of a decorated May-tree or Maypole. Such kinds of rites were probably believed by people to ensure fertility for crops, livestock, and humans. In the 20th century, since May 1 became associated with the international holiday honoring workers and the labor movement, traditional May Day celebrations are not practiced in many countries.